Idaho Congregation Invites Local Community to 'Come Grow with Us'

Idaho Congregation Invites Local Community to 'Come Grow with Us'

If you really want to speak effectively to a group of people, it is best to find a common ground of understanding on which you can relate to them. 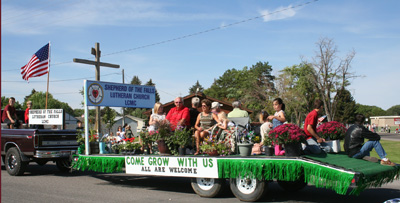 At least that is what the members of Shepherd of the Falls Lutheran Church thought when they decided to design a float for the American Falls Day Parade, part of an annual county fair and homecoming festival that takes place every August within the tiny farming community of American Falls, Idaho.

When the congregation's steering committee met in July, member Gary Tiede suggested that Shepherd of the Falls get involved in the parade by constructing a float.

The committee agreed on Tiede's suggestion and asked for ideas and input from the church community.

"Being a new LCMC congregation and being a rather small congregation, we really wanted people in the community to know they had another Christian church in town and another option for a Lutheran congregation in which to worship," said Shepherd of the Falls secretary Juanita Burgemeister.

The church agreed on the theme of "Come Grow with Us", which was suggested by 13 year-old Evelyn Bitikofer.

Once the concept was put into play, members of the congregation then needed to decide how best to communicate the idea of growth to the American Falls community.

Members of the congregation donated patio plants for the construction of the float, while the town's local fuel, farm and feed store agreed to let Shepherd of the Falls borrow several potted live trees.

"The idea of "growing" in a farming community is naturally associated with live plants and the color green," explained Burgemeister.

The large wooden cross on the front of the float was made in the spring of 2011 for Shepherd's first Easter Sunrise Service by member Vernon Bethke.

Construction on the float began on a Thursday evening, just two days before the American Falls Day parade was to be held.

"It took about three hours that evening to get the majority of the float built," said Burgemeister."If we came upon the need for a tool we didn't have, someone would call out, 'I've got one. I'll run and get it.' Real teamwork was exhibited. Our congregation worked very closely, sharing and accepting others ideas and skills."

When Saturday morning rolled around, the members at Shepherd piled onto the float, excited to show their idea to the onlookers who lined the streets to watch the American Falls Day Parade.

"As in any parade, many floats throw candy.We were to be no different, but we wanted the candy to be more than just candy, we wanted to share the message," Burgemeister said. "We threw 'scripture' candy to those who lined our streets: hard strawberry creme candy with a scripture on each wrapper."

The parade itself was filled with floats from schools, businesses, and civic service organizations, however Shepherd of the Falls was the only Christian church to enter a float into the parade.

When the parade commenced, compliments poured in from the people of the American Falls community.

According to Burgemeister, one onlooker even commented that if there had been a contest, Shepherd would have won first place.

Ultimately, the members at Shepherd were pleased with the way their float turned out and was received by the local community.

Not only did they feel that their creation turned out colorful, personalized and easily identifiable, the members of Shephard were satisfied with the message that their float communicated, an invitation to "Come Grow with Us--All are Welcome".

"Our first desire was that it would make us, a new congregation, known in the community. Hopefully, those needing a church home or [who were] just were inquisitive, would come, be welcomed, worship, and come to be a believer in Jesus Christ if they didn't already know [Him]."