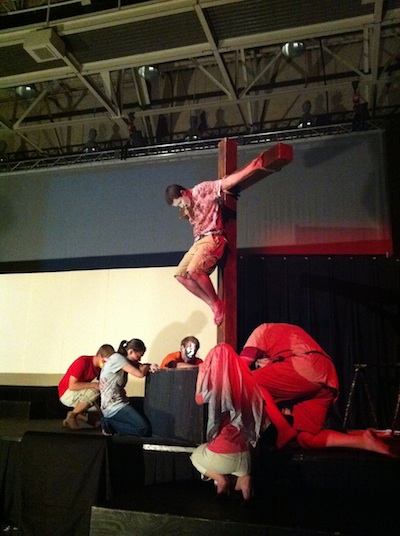 Attenders of the Annual Gathering joined together at the Polk County Convention Complex on Tuesday October 4 for dinner and a dramatic performance by AWAKEN Ministries.

The dramatic ministry group, mainly comprised of college students, acts out the story of God to contemporary music.

More unique, the actors of AWAKEN carry out their entire performance without the use of words.

As people piled into the The Plex's auditorium on Tuesday, many had no idea what to expect.

Just before the start of the performance, members of the audience were asked to keep the aisles between seats clear, to take anything that they were handed, and to eat any food they were given.

It was on this note that the presentation began.

While AWAKEN's presentation heavily involved the use of mime, choreographed battles and interactivity with the audience enhanced the experience for those who came to watch.

Also unique to AWAKEN's performance was the use of a character donning a gray shirt, a representation of the viewer and his own struggles in life.

From beginning to end, the focus of the audience was kept not on any single aspect of the performance, but on God Himself.

The drama concluded with a standing ovation from the audience.

Many members of the crowd blotted tears from their cheeks while they cheered.

"I thought it was fantastic," said Theodore Rice, who was in the audience that evening."Everything kept building and building and each scene just fit together."

"It was fabulous," agreed Sharon Rice."The best part was they way they staged the ending and Jesus' resurrection."

Cathy Pannkuk, a first-time attender of the LCMC Annual Gathering, enjoyed the performance as well.

"I thought it was very enjoyable," Pannkuk said."It's amazing how they did it without using words.It's also encouraging to see young people involved in ministry like this.

The performers and crew from AWAKEN also appeared to be fired-up after the performance.

When asked what she enjoys most about being a member of the group, actor Emily Miller said, "I think it's an awesome opportunity to share the Gospel in an unconventional way and to a new audience every single time."

"It was really awesome being here," said Jon Anenson, who formed AWAKEN Ministries in 2005 while working as a member of the staff at Riverside Lutheran Bible Camp in Story City, IA.

Anenson spent eight summers at Riverside, where the mime-style drama began in the 1980s as part of the weekly programming.

He said that his idea to form AWAKEN was a response to the popularity of Riverside's "mime drama" program.

Since the program's beginnings, Anenson reports putting on performances for approximately 13,000 people in 63 venues across four states.

The team is based in Des Moines, Iowa and generally tours the Midwest from February through April, thanks to financial support provided by donors and local congregations.

"Our mission," said Anenson, "is to "AWAKEN" hearts to the story of the Gospel."