By LCMC - October 12, 2012
LCMC is pleased to announce the ordination of Rev. Carol Clark at Faith Lutheran Church in Albuquerque, NM and the ordination and installation or Rev. Frank Remski at Reformation Lutheran Church in Westminster, CA.
The photographs and bios listed below have been submitted to us for publication on our website and in our quarterly newsletter.

Senior Pastor Bruce Wilder preached and presided at this joyful service of worship.

Carol will serve part-time on the staff at Faith as she continues teaching art history at Central New Mexico Community College.  Her primary areas of ministry will be Christian adult education and pastoral care.

She completed her theological studies while serving the past year as pastoral intern at Faith.  She was certified for ministry by the LCMC Ministry Board during the 2012 Annual Gathering in Denver. 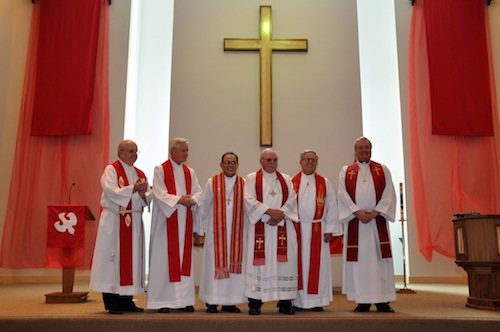 Frank was born in North Bellmore, L.I. NY.  He joined the U.S. Air Force in 1951 and served as a Radio Intercept Operator with the Air Force Security Service and holds a Top Secret Clearance.  He was Honorably Discharged in 1959.  He worked as a banker for 35 years, attaining the position of Regional Vice President and then went to work for the FDIC in 1991as an Bank Investigator and later as a Bank Examiner.

In 1996 Frank was presented to Headquarters of the ELCA ans was invited into the Alternate Route to the Ordained Ministry.  He graduated from Pacific Lutheran Theological Seminary in 2001.  He has served as an associate Hospital Chaplain, Interim Pastor at Christ Lutheran in Compton and Resurrection Lutheran in North Long Beach, CA.  He also was a short time Interim at Trinity Lutheran Church, LCMS in Norwalk, CA.. He has been teaching a Bible Class in Bellflower, CA for the past 11 years and taught Confirmation classes at Our Saviours Lutheran in Long Beach, CA. and held several other positions in the church.

In 2004, Frank joined the LCMC and is also now a pastor in the NALC.  He started handling the Pastoral Visitation for Reformation Lutheran Church on February 1, 2012 and is continuing there as Pastor.