LCMC Comes Together for 3 Days of Prayer

LCMC Comes Together for 3 Days of Prayer 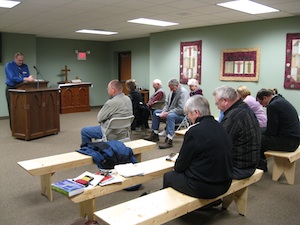 In America today, you can order customized versions of all kinds of products: sandwiches, t-shirts, frozen yogurt, cars…

But this winter, LCMC pastors, leaders and church members alike from all over the globe customized something completely different: Prayer.

From January 8-10, 2013, LCMC hosted its first ever worldwide Three Days of Prayer event, inviting association members around the world to set aside time for prayer each day, with the ability to organize each of these three days any way that seemed the most effective.

Participating congregations set aside Tuesday as a day for confession; on Wednesday, healing and restoration.  Thursday was designated as a day to invite the Holy Spirit to breathe new life into the church.

Many of our congregations chose to hold special prayer services on all three days, while some chose to set up special prayer stations and others encouraged their members to pray individually or in groups on each of the three days.

Rather than only targeting adults, some congregations, including First Lutheran Church in Washburn, ND, encouraged younger members to get involved by setting aside time to pray each day during lunch.

With a total of 86 RSVPs on Facebook alone, the event appears to have been well-received by those who decided to take part.

"We had in the end about 120 people participate," reported Pr. Paul Gausmann of Saint Paul Lutheran Church in York, PA, who organized three separate prayer services, but also encouraged his congregation members to sign up for 15-minute time slots over the three days.  "The days of prayer were a great success and encouraged many people who do not pray regularly at our prayer vigils to do so," he said.

Aside from statistical changes, some pastors also reported a change in the attitude that members of their congregations had towards prayer, as well.

"On our day to confess, someone emailed me and said, 'I have never felt so CLEAN as when I left our church.  God was with us for sure!" said Pr. Sandy Miller of First Lutheran Church in Hope, MN.

"Praying out loud is not a comfortable thing for us yet," Pr. Miller said.  "This was a great first step to come together as a congregation to pray something other than the Lord's Prayer."

Several of our international congregations took part in Three Days of Prayer, as well, including members of Galilean Evangelical Church, who reportedly prayed and fasted beyond the three days.

While 2013 marks the first year that the event was officially hosted by LCMC, the concept for Three Days of Prayer has been in the works for quite some time.

"I have believed for a long time that LCMC needs to become more and more a "People of Prayer", said Rev. Mark Vander Tuig, Service Coordinator of LCMC.

It was while attending the first ever District Coordinators meeting in St. Charles, IL that the idea for Three Days of Prayer began to take shape in his mind.

"One of the district coordinators said that every revival in the church was preceded by a time of intentional prayer.  That got me thinking," Rev. Vander Tuig said.

In his experience as a pastor, it was this act of coming together to pray out loud in small groups, at meetings, and at Bible studies, that truly began to change the heart of his congregation.

It was at a meeting in early 2012 that the LCMC Board of Trustees agreed to call and encourage each of the congregations in LCMC to three days of prayer.

This was the first event of its kind that has been hosted by the association, but certainly will not be the last.

Be sure to mark your calendars for our next Three Days of Prayer event, which is set to take place January 7-9, 2014.

For more information on Three Days of Prayer, click here.