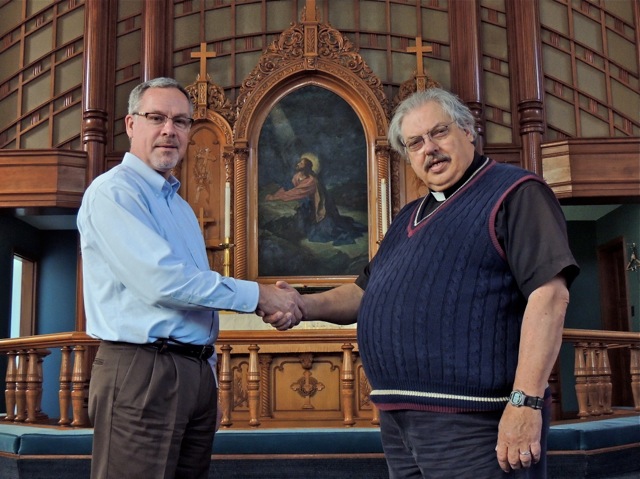 There came a day when the Apostle Paul stiffened his back and said, “No!” His “no” was hurled
at Barnabas, his partner, who wanted to take Mark along with them on the second journey to
build up new infant congregations. (Acts 15:35-41). Paul could not dismiss the fact that Mark
had bailed out in a previous mission effort. Verse 39 puts it succinctly, “And there arose a
sharp contention , so that they separated from each other...Barmabas took Mark...Paul chose
Silas and departed.” RSV

Conflict is no stranger to Christians, Christian congregations and Christian Church Bodies
throughout the world. That painful fact makes it all the more joyous and glorious when our Lord
brings blessing upon blessing to congregations and pastors that seek His will and follow it.
This is happening in downtown Seattle. It involves two small congregations. One is Denny
Park Lutheran Church (DPLC), Douglas Lindsay, Pastor. The other is Lutheran Church of the
Resurrection (LCR), Phil Lee, Pastor. Here are some snatches from the story. I’ll begin with
DPLC.

Denny Park Lutheran congregation goes way back, almost as far back as Seattle. Their
birthday is April 19, 1888. They came together as Norwegian Immigrants. Through the 125
years of their history they have had their ups and downs. In recent decades they have seen
their neighborhood move away and give way to urban inner city realities, not least to apartment
and condo dwellers who live within the enforced privacy of gated surroundings.

Pastor Lindsay described some of their recent dilemma by saying, “We were $10,000 in the hole
and wondering how we could continue. We even had to borrow from our mission funds to pay
our bills. We had no young people. And if you don’t have young people, it’s hard do get young
people.”

But DPLC moved forward in three important ways. They voted to join LCMC three years ago.
After several years in the discussion stage, they decided to sell a small slice of their property for
the construction of a seven story low-income apartment building with assured underground
parking for church members. Thirdly, they accepted a proposal to rent worship and education
space, of which they have plenty, to LCR.

Meanwhile, LCR had a vastly different history. It was only three years old, a break-away
congregation from Magnolia Lutheran Church (ELCA) in Seattle. Their first Service was held on
Easter Sunday 2010. Their pastor, however, was soon on his way to an LCMC congregation in
California. That left them with the need to call a new pastor without delay. Somehow they did.
They called Pastor Phil Lee who began his ministry in August, 2010.

It took little time to find a temporary church home at St. Luke’s Episcopal Church in Ballard, a
Seattle neighborhood. They continued there for almost two years. But it was not ideal,
especially for education space. When the rent was about to be raised, they began looking for
new space. It was discouraging. They were turned down by church after church. To build from
scratch in Seattle was far too expensive.

While they had inquired earlier about DPLC’s facilities, it took a second more formal proposal (in
writing) to spark genuine interest. The proposal was to rent space and to worship at a different
time than the DPLC. But this arrangement lasted only from November 2011 until June 2012.
By then both congregations were asking, “Why should we be worshiping separately?” They
soon learned that they were cut from the same theological cloth. By that summer they joined
hands and spirits and worshiped together!

The two pastors led the way in their trust and respect for each other. Sunday by Sunday they
traded roles in their preaching and conducting the Sunday Service. As Pastor Lee put it, “Each
congregation got to know the other, including each pastor.” It didn’t take long for both churches
to ask the obvious question about their future. And since last fall they engaged in serious
discussions that led to the Sunday of April 7, 2013.

Each congregation met separately after their Sunday Service on that day. They addressed one
major question. Shall we unite with the other congregation effective today? The vote was
remarkable, some would say “Miraculous!” There was not a “No” to be seen or heard
anywhere in these two congregational meetings! God be praised!

It was understood by both DPLC and LCR that, if the motion passed, both pastors would receive
a new Call. Pastor Lindsay, however had announced that his retirement from active ministry
would take effect at the end of this year. Pastor Lee would obviously continue. It was also
understood (a non-negotiable) that a “yes” vote would also mean that both the church facilities
and DPLC’s urban ministries would also continue into the future, not least an anticipated
ministry to the low income people who would live next door in the expected new apartment
building.

Pastor Lee captured this thought when we said, “Ahead of us is choosing a new name and a
new constitution that makes clear our need to be externally focused on the urban
needs that surround us rather than be internally focused on ourselves. My hope is that this fall
we can launch into a visioning process for just this reason.”

There are several important decisions ahead for this new congregation. They include not only a
new name and a new constitution but the election of a new church council, and issuing new
Calls to each pastor. Their goal is to make decisions on as many of these factors as possible
on June 16th.

In closing let me offer a personal observation. I have worked with both congregations in various
ways again and again in recent years in behalf of LCMC. I have interviewed and certified both
pastors for pastoral ministry in LCMC. If ever I have seen the hand of God at work among His
flock with blessing upon blessing, it is here in the midst of this urban jungle we call “downtown
Seattle”, just across the street from a two-square-block plot of walkways, trees, grass and
benches called Denny Park.