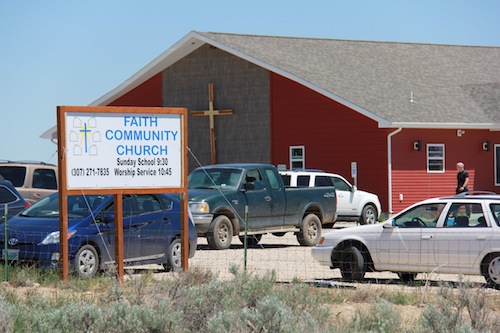 For eight months, many have been earnestly watching, and even participating in, the progress of the red church on the hill between Cody and Powell, WY. It's been a long time coming for a group of local Christians, and now after eight long years, their dream of having a home of their own has come to pass. The doors opened for services on June 2nd with a community Dedication Service of the building on June 9th.

Faith Community Church, located nearly exactly between Powell and Cody, just up the hill on highway 294, has been built largely by the hands of its own members. “You can see it from the Cody/Powell highway,” says Faith's congregation president, Lee Meador. “It's the red church on the north side of the road as you head to Cody...you can't miss it.”

Nearly eight years ago the group of about fifty people made the decision to branch out and become a new church body. With then pastor Clyde Seifert at the helm, their intention was, and still is, to become a church that rested entirely on the Bible, the word of God...all of it. No omissions, no compromises, and with Jesus Christ at the center. “God's word is entirely true. It is without error. What He says goes, and as Christian believers, we follow His teachings. We all make mistakes, but we all can be forgiven. The gospel isn't complicated and that's really what we are about—serving a loving God who wants everyone to find a relationship with Him through Jesus Christ.” 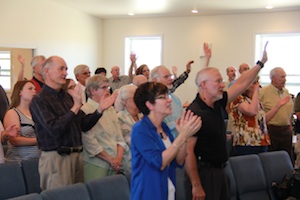 For six years, the church body, appropriately name Faith Community Church, waited for God to show them where He wanted them to be. During that time, two local churches, New Life Christian Fellowship and then the Garland Community Church opened their doors to the body of believers. “Our local churches were more than welcoming,” Meador says. “We were able to share space with them until the time came for us to discover where it was God wanted us to plant ourselves.”

The group considered many options along the way and investigated buying available space, renting something, or even continuing to share space with others. “In time it became clear we needed to have a place to call our own so we could provide the ministries we believe God is calling us to,” Meador explains. 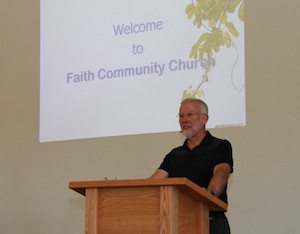 Members continued to pray and seek God's will for them. “It was sometimes frustrating to come up against dead ends or major bumps in the road,” says Meador. “It wasn't anything close to Moses wandering in the wilderness forty years, but it did get challenging at times.” After Pastor Clyde Seifert's retirement, the group began its search for a new pastor. Three years ago, Pr. Kevin Piscator was called as the new pastor, and a year later Ron and Teddy Jones decided to donate acreage to the cause. Faith members began to give generously, and before they knew it, a building began to take shape. Once the church frame was forged, church members, and even those who didn't attend Faith, offered their talents to the project. From the duct work to the landscaping and everything in between, many have pitched in to see the project to completion. “I am in awe of the volunteers who helped out here that don't even go to this church. It's been amazing,” Pastor Piscator marveled.

“The ground breaking took place in October of 2012, and we officially opened the doors June 2nd just eight months later,” says Meador. “God has been faithful in seeing us through, and we plan to be faithful in sharing His word and welcoming all to join us. Our mission is simple: Love God, Love others.”