By LCMC - September 17, 2012
The congregation of Shepherd of the Falls Lutheran Church, LCMC, welcomed Pastor Susan and Rich Westland in June of this year, celebrating her installation on Sunday, August 19, 2012 at 4:00 P.M. 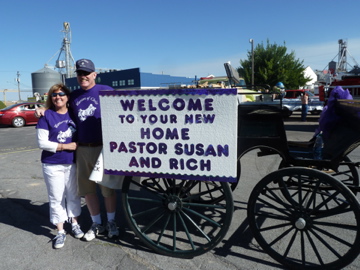 Pastor Susan and Rich, of Bellevue, Nebraska, were called to Shepherd of the Falls in June of this year and arrived in the small agricultural town of American Falls, ID on August 3.
The next day was the annual American Falls Day Parade, and preparations had been made to have them ride on a horse with a buggy, decorated in royal purple.
On Sunday, Pr. Susan's husband, Rich, sang with the "Shepherd Singers" at an outdoor summer concert called "Gospel on the Grass".

On August 12, approximately one week later, Pr. Susan conducted her first service and performed a wedding ceremony, all at one service.
Shepherd of the Falls Lutheran Church has been without a pastor since its beginning in September of 2010, when approximately 70 people walked out of another church group and began worship the very next Sunday.
"God has so richly blessed us with miracles and more miracles as we followed His timing to get a pastor," said Ms. Juanita Burgemeister, the congregation's secretary.
Shepherd of the Falls Lutheran Church began the search for a pastor in March, and through many resumes and interviews, decided to call Pastor Susan Westland, a certified LCMC clergy.
She is a graduate of Luther Theological Seminary in St. Paul, MN with a Master of Divinity.  Pastor Susan also has a BS degree in Human Resources and Family Science from the University of Nebraska, Lincoln.  Some of her training includes clinical pastoral education and Stephen Ministry leader training.
During her time in Nebraska, she served 16 counties in developing Drug and Alcohol Prevention programs for teens, assisting communities in developing mentor programs for at-risk youth, and authoring the state guideline manual for juvenile diversion programs.
She has extensive training in substance abuse prevention and early intervention programs; domestic violence, and victim advocacy programs and has served as a Court Appointed Special Advocate volunteer.
Susan and Rich have been married for ten years and are parents of four adult children and grandparents of two.
Pastor Susan previously served as Vicar in charge of pastoral care at Thanksgiving! Lutheran in Bellevue, Nebraska.  Rich is a retired U.S. Air Force Lt. Colonel and plans to attend classes at ISU.
They are active in the Christian Motorcyclist Association and enjoy the ministry with love and compassion.
Pastor Susan and Rich are truly thrilled to be in American Falls and look forward to meeting those in the community sharing the Gospel and the love of Jesus Christ.  God has moved mountains and has blessed them in so many ways in bringing them to American Falls.